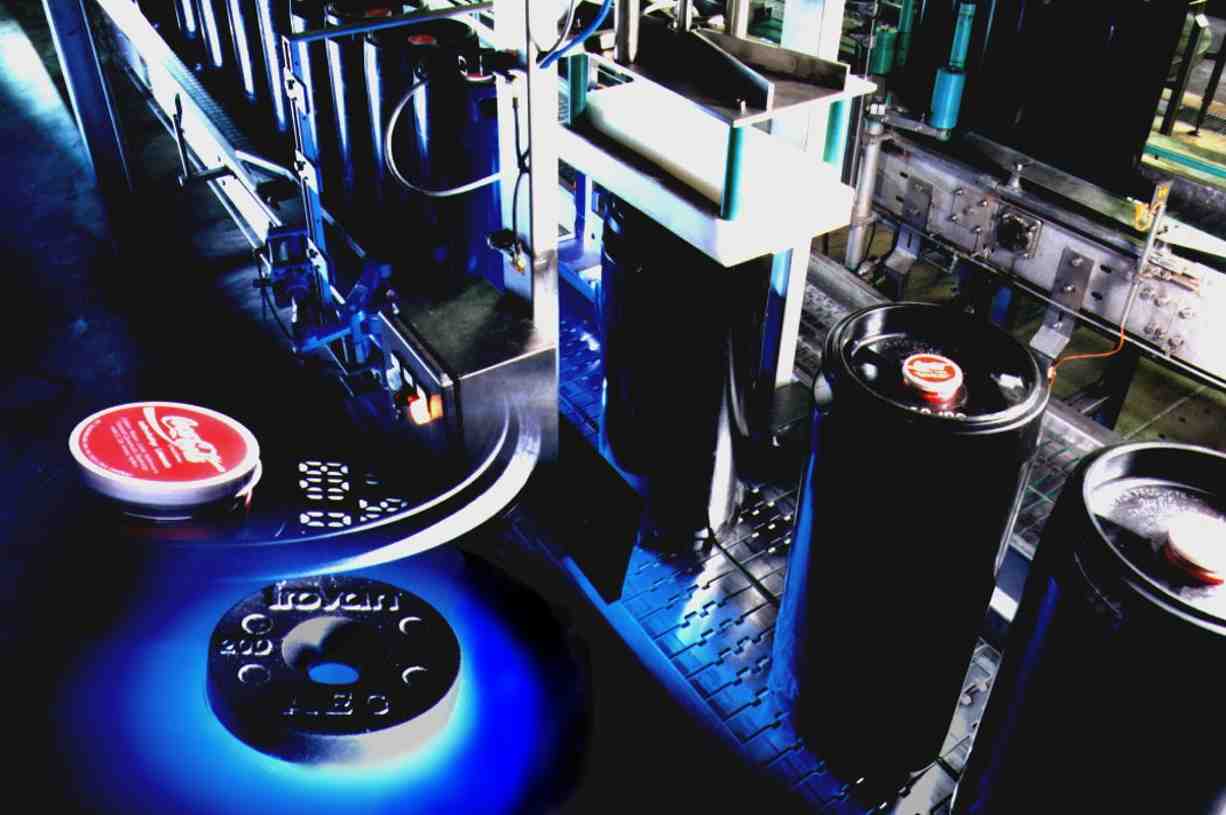 The company needed an automated keg-tracking system to improve its process control and plant efficiency. In the old system about 300 kegs per year were subject to forced retirement because of previously unidentified defects, and resulting customer service issues had to be resolved by the bottler's service personnel at customer sites. The plant has 230,000 kegs in circulation and can fill up to 800 kegs every hour.

First the company implemented a barcode system, but the limitations of the technology soon became apparent: the tag has a limited life-span because it eventually peels off or wears down; it requires line-of-sight scanning, thereby reducing the speed of a keg on the conveyor belt; and, finally, the code of the tag, mere ink on paper, can be duplicated.

The solution to the problems was the trovan® passive transponder system. The trovan® transponder consists of an I.C. with a copper antenna coil. It is encapsulated in a ruggedized housing and is the size of a subway token. The microchip is encoded with a unique, tamper-proof code and it does not rely on an internal power source. When a reader passes over the transponder, the transponder emits its code back to the reader where it is displayed on an LCD. The reader is equipped with an RS 232 interface which downloads data to and uploads directives from computers.

"Because of the microchips, every keg can be positively identified, each with its own identification number and its own recorded history," said Karl-Heinz Porsch. The keg history includes data on the age of the container, the number of times it has circulated, and the length of time it has remained with each customer, as well as its contents. With this close monitoring system, the Liederbach plant saved money by reducing the number of kegs needed. It eliminated problem kegs and is keeping more of its keg inventory in circulation at all times. Operational efficiency in the plant itself also increased, since the transponders are permanent and do not require line-of-sight scanning.

The transponders are either epoxied on top of the keg or countersunk in the walls and then sealed. Readers are stationed ablove the conveyor. When the kegs pass through the production line, they go through eight different checkpoints for cleaning, damage verification, quantity and content control.

Thanks to its new keg tracking system the company has been able to implement a fully automated cleaning station, damage verification station and at the end of the line a quantity and content control station. If something goes wrong with any particular container, the computer-controlled system simply denies the necessary codification and the keg is automatically removed from further processing on the conveyor.

"It is not possible to fool the system. If the conveyor stops, the cause must be resolved before the container is again accepted by the system control of the conveyor," said Managing Director of the bottling company, Erhard Koczorek.

The next stage of implementation closes the logistical gap between the bottler and the customer. "Every delivery driver can add data to each keg's record at the customer site. For instance, date and time of a delivery of pickup," according to Karl Heinz Porsch, representative for AEG Industrial Systems, the systems integrator.

While out in the field, drivers who deposit the kegs at various locations can use hand-held readers to scan customer details and check the status of the kegs. Customers are pleased because the automatic verification feature inherent in the transponder system ensures that they will receive the soft-drink they have ordered in a well-maintained and sterilized keg. In light of the fact that Coca-cola has introduced the use of "on-tap" kegs for soft-drinks to the food-services sector, the number of circulating kegs in the field will grow. Cost contaiment for the existing soft-drink keg stock will remain an important issue. RF/ID has provided the solution.

Managing Director Koczorek agrees with a smile. "I was correct in my judgment call. We have realized tremendous savings from the elimination of problem containers, and customer complaints have been reduced to nearly zero. We feel confirmed in our decision especially when experts from around the world regularly come here to admire our microchip system."