In eight short weeks of operation, a ground-breaking system has shown itself to be a serious menace to the profit margins and prospects of caravan thieves: caravan and camper owners have begun installing Identify UK’s stoptheft® system, which has already resulted in the recovery of two stolen caravans worth around £30,000. "Effective, permanent identification plays a key role in combating caravan crime," said Chris Nettleton, Development Manager at Caravan Guard, one of the UK’s leading caravan insurers. "We believe the stoptheft®system fulfils that role and have adopted its implementation throughout our customer base." 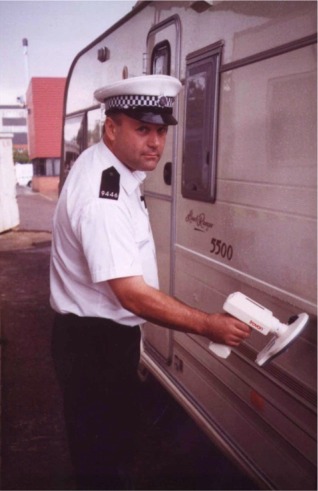 Historically, recovery of stolen caravans and campers has often proved to be a daunting task. Inspector Geoff Robinson, of the Thames Valley Police Force Traveller Management Unit, explains the police force's predicament: "Police officers face a number of obstacles when attempting to establish the rightful ownership of a suspected stolen caravan. Although all caravans are manufactured with chassis plates and serial numbers, these are easily removed. Criminal law requires the police to prove that an item is stolen to support proceedings against the offending parties and to give the Court a power of confiscation. In the absence of these physically identifiable plates and numbers, many cases are lost. The decision to seize a caravan for closer examination resulting from its lack of a chassis plate or serial number is not one that can be taken lightly, especially if it results in the current occupants being made homeless."

Now, help is on the way for caravan owners and the police officials who have to walk a fine line between protecting the rights of victims and those of individuals suspected of holding stolen vehicles. The solution? The stoptheft® caravan identification and recovery system. The system takes an innovative approach: uniquely coded radio-frequency ID tags are mounted at the front or rear of each caravan. Each ID tag contains a microchip pre-programmed with a unique ID code number, making it impossible for thieves to "crack", duplicate or tamper with the code. A policeman or insurance agent can detect the tag by simply passing a reader over it, at a distance, then check with the national stoptheft® registry to determine the ownership of the vehicle. For added security, additional transponders are hidden in random locations within the interior and/or exterior of the vehicle. The presence of these randomly fitted transponders not only deters theft by increasing risk of prosecution but also reduces the resale value of stolen vans below levels acceptable to professional caravan thieves.

Inspector Robinson explains: "An effective RFID-based system backed up by a national infrastructure of tag readers and a police accessible database removes these problems, enabling officers to establish the identity and thereby the lawful ownership of a caravan quickly and accurately without the need for seizure or vehicle examination. The technology makes the identification of stolen caravans much more efficient and effective and will undoubtably lead to an increase in the number of stolen caravans recovered."

The stoptheft® system is supported nationwide by an infrastructure of tag readers with police, insurance agents and caravan dealerships. Almost 3,500 TROVAN® readers are in police use and today more valuables are fitted with TROVAN® tags in the UK than any other tagging system.

"The TROVAN® system provides absolute ID code uniqueness, meaning that not only does the manufacturer ensure it makes no duplicate ID codes or custom-coded ID codes, but the patented protocol allows legal prosecution of third-party manufacturers of cloned ID codes. This ID code uniqueness is absolutely crucial to establish positive identification of a vehicle and its owner, which is why we have selected this technology over the others." explanied Mr. Nettleton. The tags can be read through most materials, and at any angle.

The "owner and police-friendly" stoptheft® caravan identification is now THATCHAM Q listed. Thatcham is a world leader in independent vehicle security testing. Its test regime, considered one of the most rigorous in the world, assessed stoptheft®’s performance on several levels; via an on-vehicle test programme, via an evaluation of stoptheft®‘s property register operational procedures and police liaison. The results showed that the system performs as claimed, and demonstrated its reliability, durability and loss-reduction potential in accordance with Thatcham’s requirements for the ‘Q’ Class System Listing.

For the on-vehicle tests, TROVAN® electronic ID tags were randomly embedded into a caravan. A physical inspection failed to reveal the embedded tags. Next, the speed and ease of verifying vehicle identification was assessed. An engineer, with no prior experience of using the TROVAN® hand held reader, was able to read the secreted tags, enabling positive identification of the caravan from the stoptheft® property register database.

"The independent testing and evaluation conducted by Thatcham will help to instill confidence within the industry that there is, at last, an effective solution to caravan theft," said Mr. Nettleton.

As a result of the successful Thatcham test, Barron group, the UK’s largest caravan retail group, has implemented the stoptheft® system into all 2002 tourers, campers and motorhomes. Three Trovan transponders are randomly installed, supported by external warning labels and visible ID labels. David Hold, Chief Executive of the Barron Group, explained the company’s decision. "Caravan theft is an increasingly real and frightening issue. We want to prove our commitment to customers’ security by fitting stoptheft® to every single new model that is sold at our Barrons dealerships in Lancashire, Cumbria and Co Durham. Achieving Thatcham listing for the stoptheft® product is a major development in caravan security. Electronic tagging has proved successful as a major theft deterrent in the motor vehicle industry and we believe it will do the same for the caravan industry." The stoptheft® system has already been implemented by German manufacturers, Hobby Fendt for all UK-destined 2002 models. Leading UK insurers and dealers are also backing the technology.

Insurers are being offered the product at special prices for volume tagging applications. Comments Identify UK chairman Lord Nicholas Hillsborough, "Caravan owners installing the stoptheft“ electronic tagging kit can rest assured that they are using cutting edge technology from a world leader in electronic identification systems. For those who handle stolen vans to be convinced that the caravan is ‘clean’, the thief would have to locate and remove all the tags randomly fixed or embedded around the caravan, a virtually impossible task making stoptheft“ a tremendous deterrent."

Inspector Robinson sees potential for the technology in a broad spectrum of applications, limited not only to caravans and campers: "Due to the size of RFID transponders, the benefits and protection afforded to caravans is also available to a wide range of other high theft risk property."