Coastal Welding Supply of Beaumont, Texas, has become one of the first welding supply distributors in the nation to implement what some would consider “Star Wars” technology to track their compressed gas cylinders. At the heart of Coastal’s new system is a high tech radio frequency identification tag. This tag, also known as a transponder, plus new sophisticated software has given Coastal the ability to track their cylinders with greater accuracy than was previously possible.

According to Coastal Vice President, Chuck Mazock, “We were not pleased with the durability of the barcodes we were using and our old cylinder tracking software was no longer being supported. We had heard about transponder technology and since we are a Praxair distributor we called them for guidance. Praxair had just completed a successful pilot test of TROVAN transponder in Brazil. The test showed that the TROVAN transponder was very durable.” 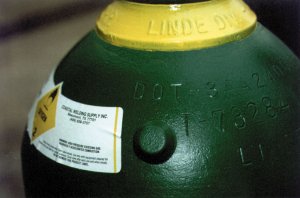 When questioned about the durability of the transponder, Trovan explained some of the tests the transponder has successfully passed. The tests included: repeated shot blasting, heated to 300 degrees Fahrenheit for 30 minutes, dropped into liquid nitrogen, exposed to high doses of radiation and subjected to 100,000 volts of electricity.

One of the requirements of the Praxair pilot project was for the transponder to not be visible but still be readable. A hole was drilled in the neck ring, the transponder inserted, covered with epoxy and then painted over. Even under these conditions the transponder could easily be read. In fact, according to Trovan, Ltd., their transponder can be read through ice, snow, paint, mud, grease, wood, plastic or cement. 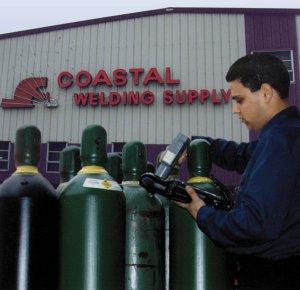 “We had significant investment in our account system and did not want to replace it.” reports Mazock. According to Dataweld, the open system design of AcuTrax allows distributors to install the cylinder tracking system without having to replace their existing accounting software.

With a year of experience under his belt, Mazock is pleased with the new technology. “Our plans for the coming year are to continue putting transponders on our cylinders and expand the program to our other branch locations.”

In closing, Mazock said, “We feel the durability of the transponder and the upgrades of our tracking system has helped us to minimize cylinder balance discrepancies. After all, our customers deserve our best efforts when it comes to ensuring the accuracy of our cylinder records.“