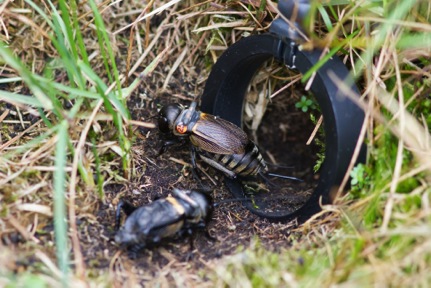 The challenge faced by the researchers was to positively identify crickets in a longitudinal study that monitored their behavior over time, and correlated this behavior to survival rates, social interacts and reproduction.

"I started to study the effects of social interactions on reproductive success and behavioral expression in 2013 by using wild population of field crickets as model species,” says Petri Niemela. "During the first year, I collected behavioral and location data on crickets manually but then I started to think that it would be cool to have a system that would do it for me and with greater resolution/detail. By collecting such data manually will necessarily lead to situation where large amount of short social interactions remain unnoticed. I did some research about possible solutions and ended up with RFID technology, which has previously (and successfully) been used in other insects like bumblebees.”

Since the crickets are quite small, a miniaturized, high-performance tag was essential.

Trovan recommended use of the ID-100/1.4 TROVAN UNIQUE mini transponder. An adhesive was used for the attachment. The tags were glued to the pronotum of the cricket diagonally, to optimize data capture, since optimal orientation is achievable with tag and reader coils facing each other in a ‘mirror image’. 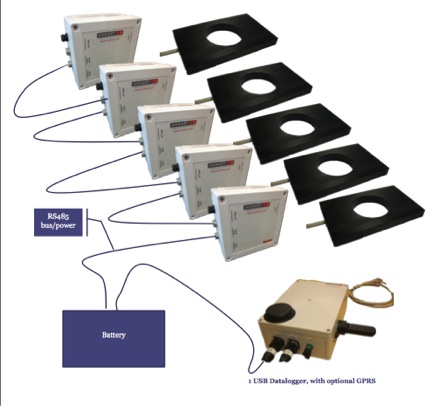 Trovan supplied a modular, weather resistant, networked reader system consisting of multiple antennas and decoders to collect data on crickets in the field. Clocks were synchronized with GPS timing. Data was automatically copied to a remote computer using a USB data logger and GPRS/Wireless modem.

Petri Niemela’s team deployed 100 antennas with decoders during the second year of the study. In the third year, the team expanded the system with an additional 45 antennas and decoders.

"In the figure, each circle represents one cricket,” says Petri Niemela. "Each line between circles indicates that those two individual have interacted with each other. The larger the circle, the more that individual has social interactions. Data I used to create [this network diagram] represents social interactions during a 5 day period (it is a sub sample from the whole data).”

Petri Niemela’s team gathered data on behaviors that the crickets express naturally in the wild. The study recorded risky behaviors by the crickets: maximum distance from the burrow, flight initiation distance, and emergence time following disturbance. Their findings clearly demonstrated individual personality variation, and that this is linked to the individual’s fitness. Bold crickets with a greater flight initiation distance were more observable, however had shorter lifespans.