The Opel Corporation has implemented the TROVAN RFID system in its German chassis production plant in order to monitor product quality and introduce process efficiencies. The application is an example of successful implementation of the TROVAN system under marginal and difficult environmental conditions.

The Opel Manufacturing Plant in which the TROVAN system is being implemented is one of the largest automotive plants in Europe. Two parallel assembly lines manufacture about 1,600 vehicles per day., The production lines are not dedicated lines for a single model only. Rather, both production lines assemble Astra and Vectra model automobiles, as well as left and right hand drive vehicles in a mixed fashion. As a result, there is an optimal use of the capital equipment in the plant, but the flip side is that a very well-developed production control system must be in place in order to ensure that the correct parts are assembled in the correct chassis. 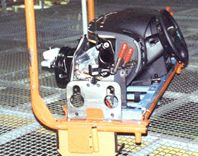 The dashboard modules are introduced to the assembly line via a single (gondola-type) conveyor system. On these product carriers (red gondolas), the respective parts are attached (blue construction). They look quite similar but differ according to the vehicle model for which they are destined by their finish and also according to the requirements of the individual countries to which the vehicles will be shipped. Visual differentiation is quite difficult. To ensure positive identification in this industrial environment, Opel has conducted exhaustive tests with a variety of identification system and ultimately decided to use the TROVAN passive transponder system. Opel selected the TROVAN system because of its superior environmental and performance characteristics: specifically, the compact yet extremely rugged design of the transponders and the industrial-grade execution of the reader systems and because TROVAN’s unique PSK (phase shift keying) half-frequency transmission technology results in unmatched reliability and a system that is able to function even in areas of extremely high EMI.

Even though the transponder is mounted directly on metal and the readers are located in close proximity to assembly line areas where soldering takes place, positive identification (greater than 99.9%) is guaranteed at a read range of more than 10 cm, while the assembly line is in continuous motion. 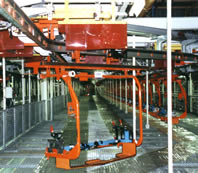 The tests conducted in the plant showed that even if the walkie-talkie and RF communication systems being used in the plant were directed to transmit directly at the reader (the antenna of a mobile transmitter was held directly next to the EUR-3020 panel antenna) 100% of the transponder ID codes were read. Use of the TROVAN transponder system ensures that the correct trolley with the correct parts are at the right place at the right time. The use of incorrect parts is eliminated. The result is a zero error system which is a significant improvement over earlier quality control solutions. Problem-free assembly of the vehicles is assured. There is no down-time and no time is lost in re-tooling assembly lines to accommodate other vehicle models. As a result, the throughput of the assembly line is improved. The system functions even in the most electro-magnetically challenging environment with no error. 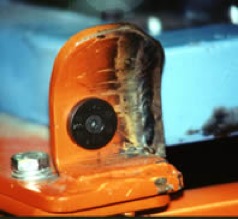